Friends: I’m finishing up Dev Bootcamp, Phase Zero, Week Two, and I have to say, It got me.

It got me good.

But during the time I took completing the challenges for Week Two, I learned SO much about HTML and CSS, that I got this pretty lil’ website to show for it!

Edit: This was the website I built from scratch during Dev Bootcamp Phase Zero 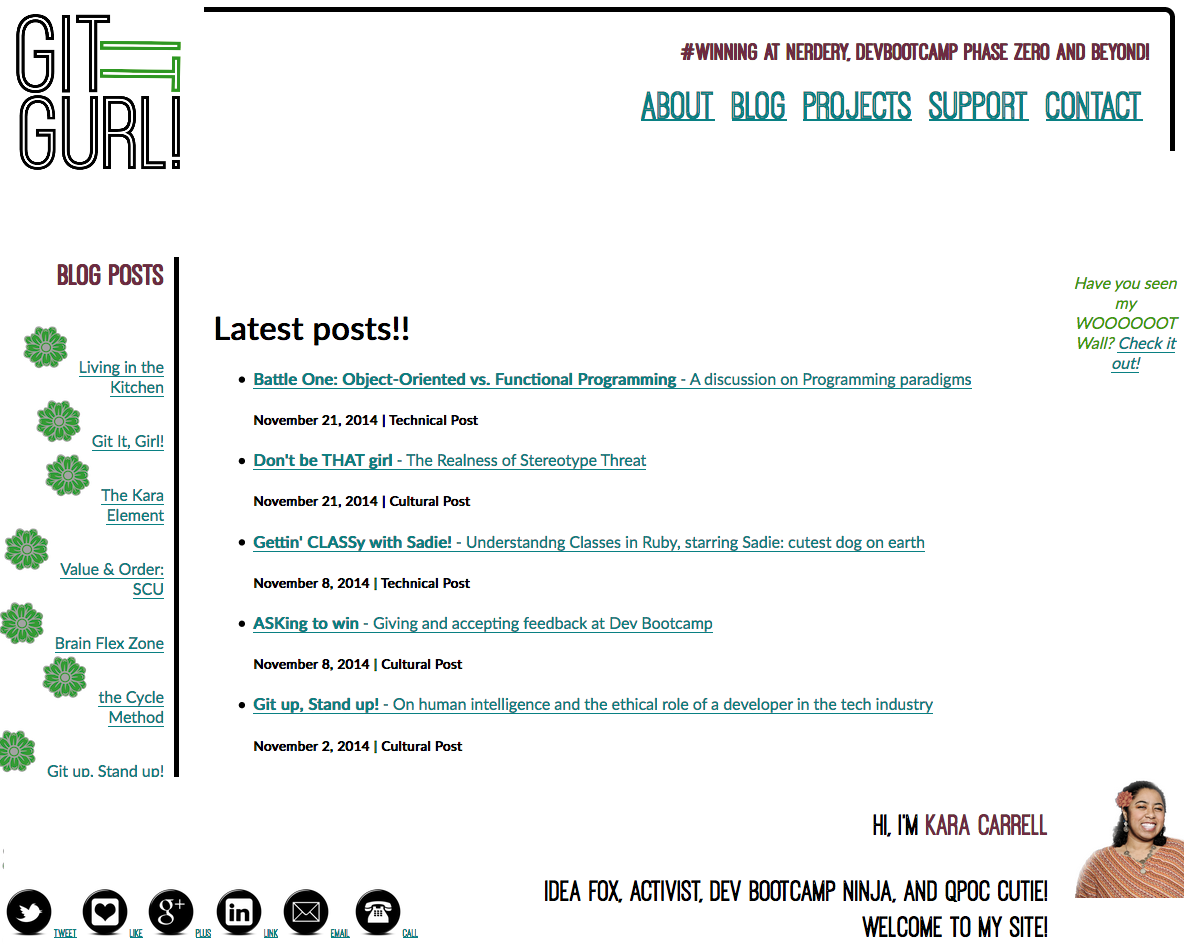 Today, I want to show you all a few things I learned about HTML and CSS; Things that help many of the websites you love look as beautiful as they do, and keep others from getting there. This post is going to be about a foundational concept you need when you think about websites. It’s called the Box Model. And though beauty is in the eye of the beholder, this model helps you understand the parameters you can declare to digitally express yourself in any way you’d like, and if you know me and my nerdy, feminist, body-positive ideals, you know I’m loving that!

The Box Model is a concept that web developers and designers use to determine how they want the elements that they create to look and interact with eachother. It basically states that all elements are boxes. What I’ve done here is decide to explain the Box Model using my lovely self, in Bitstrip form, as a model. 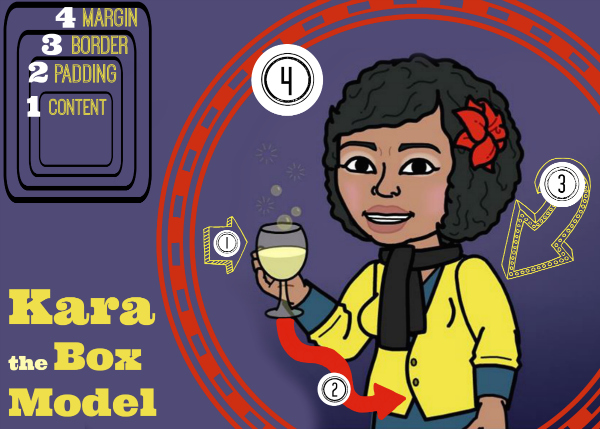 Meet the Kara Element. She’s got a tasty drink in her hand (it could be wine, or it could be agua de tamarindo, you decide!), she’s feelin’ awesome, lookin’ good, and her aura is drawing you in with an inviting red glow… looks like she’s ready to explain the Box Model!

Starting from the Content, the element is wrapped in boxes called Padding, Border and Margin. Here’s an explanation of what each of these boxes do: 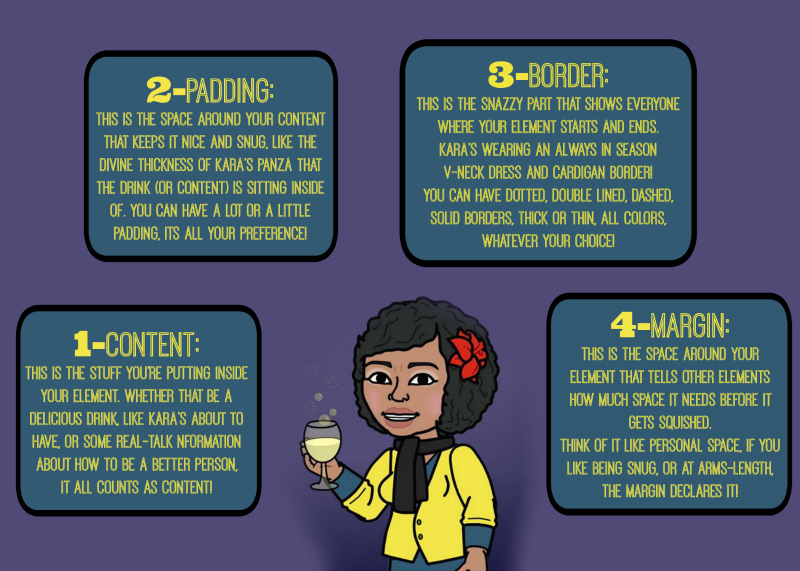 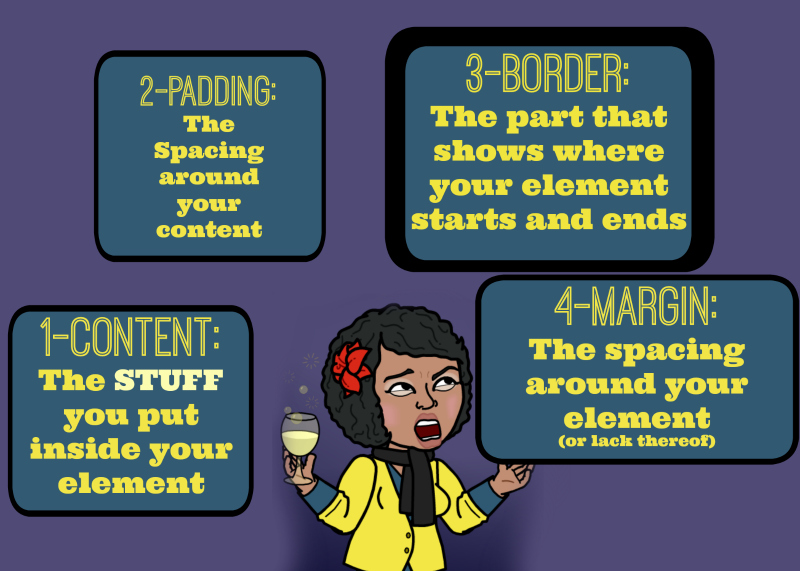 Once you decide what kind of content you’d like your element to have, and you write all that out in HTML, you can decide how you want the boxes to wrap around so it creates an element that looks as awesome as your content is, in CSS!

So, If I were to write specs for a Kara Element, what would it have? 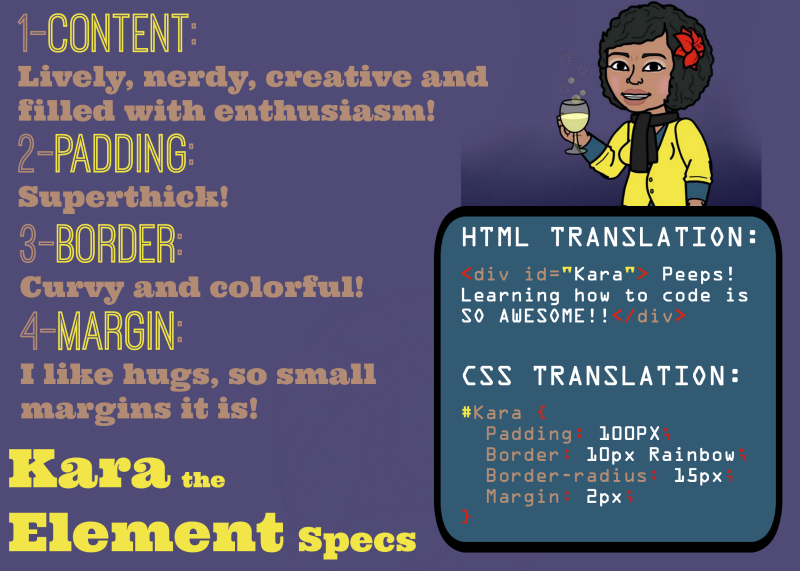 So there you have it, everyone! the Box Model explained by Kara, the ‘Box Model’ Model. I hope this helped you all gain a little more understanding of websites, CSS, HTML, and about your dear friend over here, Git’in her education on at Dev Bootcamp.

I’m curious, What would YOUR element Specs look like? What kind of CONTENT do you hold inside your PADDING? What style are your BORDERs, and what’s a comfortable MARGIN setting for you? use #MyElementStyleis hashtag to share it with me!!

EXTRA CREDIT if you code it out, and take a photo!