Today, we had the engineering team from LiveWatch come out and speak to the delta cohort about their experiences. It was validating to see and hear lots of the pieces of work we’ve taught so far being applied and encouraged as they took us through the tech stack running their platform, and engaged with the students about their journey to tech.

Being the visual listener that I am, I jotted down my interpretation of some points the LiveWatch team made on things they wish they knew when they started out, and continue to be valuable nuggets of wisdom to hold onto. 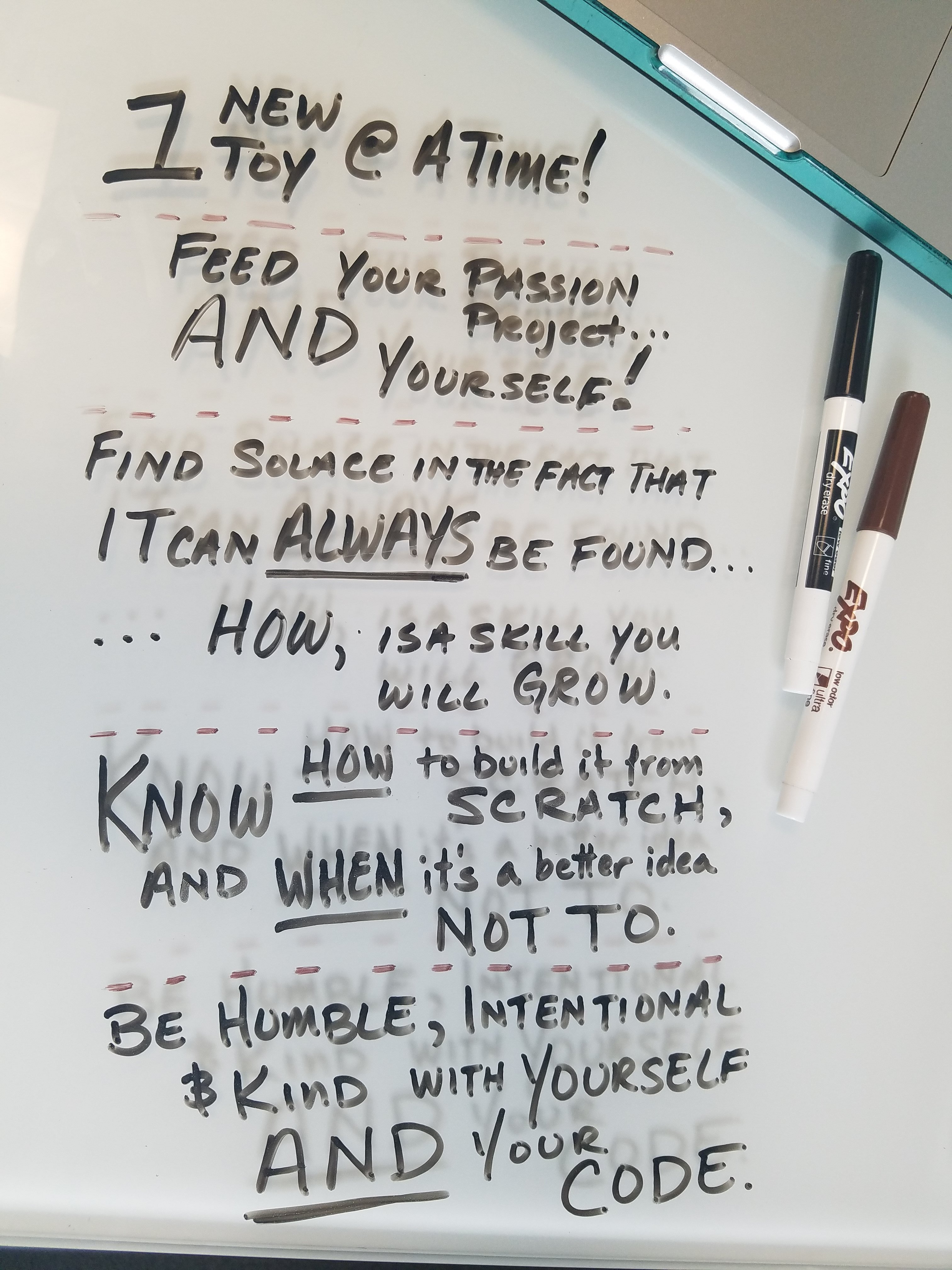 Nuggets of Wisdom for Code Newbies:

One New Toy At A Time!

Nat suggested when you want to build something, don’t pile on all the shiny new-new into it. Instead, pick one new toy, so learning about its’ quirks, bugs, and features will be easier, and more fun.

Feed your passion project, AND yourself!

It’s easy to drop the nerdy fun when you get into a full time role. Avril suggested that to sustain your passion for tech, feed it with a small project, something you love to do, that will help remind you that you’re here for a reason. It’s also super important to remember that you should be taking equal, if not, more time feeding yourself, mentally, emotionally, AND physically! 🌮

It can ALWAYS be found; HOW is a skill you will grow.

Getting stuck as a developer is a part of the job, but as Brian suggested, how you remove yourself from being stuck depends on your belief that the source of the problem can always be found. As you grow in your craft, reading errors, stack tracing, and asking the right questions to your peers (AND to google), are skills you become better at, and make you a better developer.

Know HOW to build it from scratch, and WHEN it’s a better idea not to.

While our students sprinkled the LiveWatch team with questions, Wes mentioned various libraries and 3rd party integration partnerships that they utilize, and the benefits of doing so. Making decisions to use ‘out of the box’ solutions are great for a starter, and sometimes, much more seasoned folks make choices to use those as well, but knowing what’s going on under the hood, and what costs can be associated with trying to “Roll Your Own” vs building “Out Of The Box” is the sign of more experience.

Be humble, intentional, and kind with yourself AND your code.

Coming from a background in Music Composition, David spoke of the idea that many have around the code you write feeling a lot like your ‘baby’, much as it does when creating Art. Releasing that idea, and learning to take on critical feedback when you’re new, and be kind when giving feedback, can be life-saving, as a new developer. Additionally, Wes talked about how we often take to writing something that works now, and think we will come back later to write better code, knowing that we’ll rarely get that chance to do so. Instead, he suggests that we be intentional in our code, it’s an act of kindness on your future colleagues, or your future self if you ever do get back into that code, and your codebase will be better for it.

Thanks to the LiveWatch team for coming in, and sharing so much!

⬆️ Next Post: The HexQueen Taught Me Her Spells